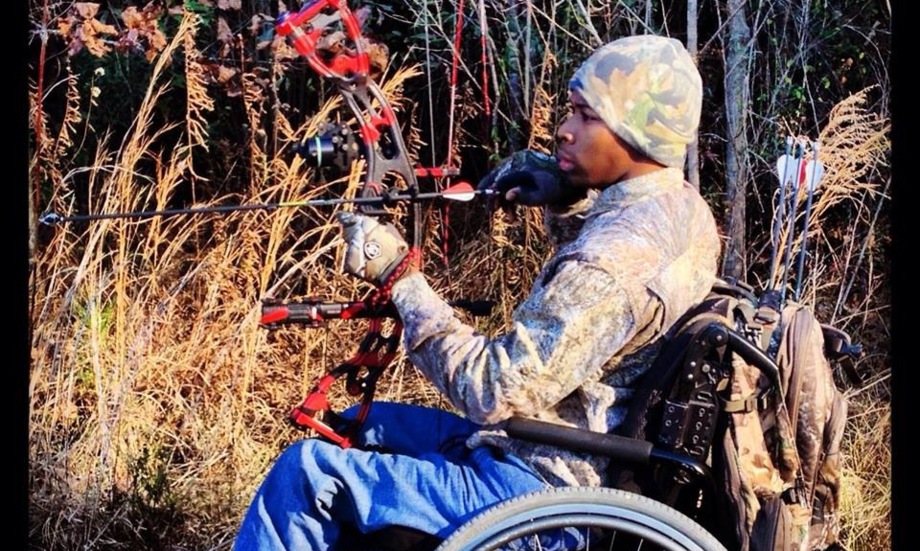 Joshua Carney has recently worked towards obtaining an ActionTrack wheelchair that allows him to hunt like any other non-disabled person and fulfill his dreams in guiding hunting through televised programs … read his story and learn how strong this young man has been below.

The beginning of Joshua Carney’s journey began on Sunday morning, April 17, 2005. Carney and his family went to church and enjoyed a great service, but Joshua was a bit pre-occupied with the thought of his first turkey hunt, that was to occur right after church. Upon dismissal from church, Carney was so excited to get to the woods for a long-bearded turkey, that he literally changed into his hunting clothes in the church parking lot. Finally, Carney’s father took him to the woods (Walmart turkey call in one hand, and his 410 pump in the other). The two were headed down a gravel road for about 600 yards as Carney came across a turkey feather on the gravel road, indicating that this was the spot to enter the woods. Into the woods while crossing a ditch, they went approximately 100 yards and picked out two spots for hunting. The spots were about 30 yards away from each other. Their plan was to sound like two hens in order to lure a gobbler. Well, the hen sound worked. The turkey came in silently from a thicket to Carney’s right side, and he made his way behind the tree on which Carney was sitting. Carney’s dad threw up his 12-gauge loaded with double ought buck shots and took his aim, then squeezed the trigger.

Carney having looked straight down the barrel of the gun, could no longer move -- he had been shot by his dad! With numbness in his body and a horrible ringing in his ear, Carney sensed that his dad had picked his bloody body up as he went in and out of consciousness. Carney could remember hearing him call 911, and call his name. At this point Joshua thought he was close to death. As they made it to the EMS, Carney asked, "God watch over my dad.”

After multiple surgeries, having lost extreme amounts of blood from the double ought buck shots which hit: his stomach; both lungs; both arms; chest; pelvis; throat; back, and shoulder, Carney did end up dying and being revived by medics twice in the process. Once the medical team finally had his body stabilized, he was flown to New Orleans for further surgeries before beginning rehabilitation. One night, while still in the hospital with wires and a tube placed in his throat, a nurse came in and told Carney that he would never walk again, and the doctor reiterated, adding that Carney would never talk again either because of the tube remaining in his throat for such extended periods. The thought of this sickened Carney so much that he surprisingly pulled the tube out of his throat and told the doctor that he (the doctor) was wrong. To the medical team’s astonishment, he soon learned that by pulling the tube out of his throat, it had altered his vocal cords to the point that his voice could never fully mature, even after vocal therapy.

It was hard for Carney to adapt from being able to walk one day, to not having the use of his legs the next, and as he stated, “… in the blink of an eye, [his life had forever changed].”

Hunting was Carney’s life, and at 13 years of age, it is what he loved to do. He was able to learn how to roll, but he was still confined to activities of watching movies, in which, Old Yeller and Where the Red Fern Grows, were continuously repeated views for Carney. He had missed his home, his personal space, his dog, and most of all; he had missed hunting. He even felt guilty in the fact that he was letting his dogs down by keeping them pinned up and not going hunting. After a while, Carney was able to convince his father to take him hunting again, and at that point, Carney realized his long hard challenge, but one he accepted with pure pride and joy. However, these types of emotions and feelings of being a burden to his family, were just a magnificent challenge within itself. Carney was having questions with God at this time. Over time, Carney had more obstacles to face, such as his parents’ divorce and among other trials and tribulations relating to his doubt in his faith. He felt so responsible for the divorce of his parents, that he was ready to take his own life so that they might live their lives – he questioned why God did not just take him that day he was shot.

It was not until Carney went on a Trinity Outdoor Disabled Adventures (TODA) disabled hunting trip and saw all of these people with different disabilities, that he began to become more self-aware of his own disability, and how it was not that different from their disabilities after all. He continued to attend events, and about two to three years ago, “… things slowly started to click in his head, and Carney said, "God, I quit, I'm done being who I want to be, so show me who you want me to be and what you want me to do.”

Carney continues to touch the hearts of others and to be a leader by setting an example where one should be set. Carney prayed and asked God to also help get some hunting time into his life, and his prayers, as he stated it, “… have been answered tenfold, and more than one can ever imagine.”

Carney feels that the worst of his situation has become the best blessing that life can offer. He has been able to work with Trinity Outdoors Disabled Adventures (TODA) witnessing his testimony to many, and leads many to faithfulness through his longtime love of the great outdoors and hunting.

Joshua Carney represented Trinity Disabled Outdoors Disabled Adventures in the inaugural race in person, and each year, we will seek a new inspirational leader of the organization will be represented, but always will hope that Joshua can visit our race as part of its heritage. His story inspired the launch.

Please submit your message under the Contact Us link and allow at least 24 hours for a response.

Learn more about the Meals on Wheels of Johnson & Ellis Counties at https://www.mowjec.org.

Read the stories from several recipients and volunteers. Find out how you can become a volunteer or help make an elderly life more meaningful (by allowing them to stay at home while remainig self-sufficient and healthy) through your time and donations. Each donation of $5 means a meal, with $35 supporting a week's worth of meals. It is a great feeling to help!

"Some of these people only receive the visits that I provide because they have no one else that visits them, and that makes me proud to be a volunteer."
H. Diggs, 2017

Founded in 1977, the organization currently serves 3,000 people a year in a two-county service area that covers more than 1,700 square miles. 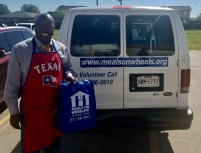